Home
/
Biotech
/
Vaccine Capitalism: a run-down of the huge profits being made from COVID-19 vaccines

Pharmaceutical companies and their bosses and shareholders stand to make billions from COVID vaccines, in one of the most spectacular examples yet of COVID profiteering. This is largely thanks to a double handout from their friends in governments: first heavily subsidising drug development; then letting them charge prices often way above costs. Meanwhile, the poorest are left behind once again – as the governments uphold the companies’ intellectual property rights, preventing poorer countries from producing vaccines faster and cheaper. See also: our explainer here on how the pharma business model works.

Here we look at the three leading vaccines now approved in the UK and Europe: those made by BioNTech and Pfizer, Astra Zeneca and Oxford University, and Moderna. Just how much money are the companies behind them going to make? How have they been supported by the public sector? And whose pockets will the money end up in?

How much profit will they make from the vaccines this year?

BioNTech/Pfizer: estimated $4 billion profit, after sales of $15 billion. Pfizer says it already has orders for at least $15 billion worth of vaccines, at around $19 a shot. According to the Financial Times, the profit margin could be close to 30% this year. Unashamedly working to maximise profit, Pfizer is reportedly driving a hard bargain when negotiating sales with both richer and poorer countries.

Moderna: estimated $8 billion profit (i), after sales of $18.4 billion. Moderna says it is on track to produce at least 700 million pre-ordered vaccines in 2021. Moderna’s jabs are the most expensive, between $25 to $37 a shot and the company says the cost of producing its jabs will be as low as 20% of sales.

Oxford/AstraZeneca: unknown profit, after forecast sales of $6.4 billion in 2021. It is selling at the cheapest price (for now) and they have promised to produce at cost without making a profit “during the pandemic”. But what does that really mean? One leaked contract seen by the Financial Times suggests they could declare the pandemic over and hike prices at any time from July. And AstraZeneca’s contract with Oxford University reportedly allows the company to make as much as 20% on top of the cost of manufacturing the jabs. In another sign of the limits of the “at cost” pledge, poorer countries including Bangladesh, South Africa and Uganda all appear set to pay more for the vaccine than the EU.

NB: The vaccines are being bought by governments around the world in advance bulk orders. Those profit figures, therefore, come overwhelmingly from sales to public authorities. As we see below, governments also massively subsidised the vaccines’ development. So the public sector is paying twice over: first to fund research, next to buy the results at inflated prices.

What about future years?

This is anyone’s guess. Given the amount of vaccines in development, competition may keep costs down. But if some prove more effective than others, and COVID-19 jabs become a regular event with annual boosters as for flu vaccines, the profits could keep rolling in for years to come. And once the pandemic’s intensity dwindles, all companies may feel free to hike prices further. For example, Pfizer’s chief financial officer told analysts the current price is “not a normal price, like we typically get for a vaccine — $150, $175 per dose. Let’s go beyond a pandemic pricing environment, the environment we’re currently in: obviously, we’re going to get more on price”. 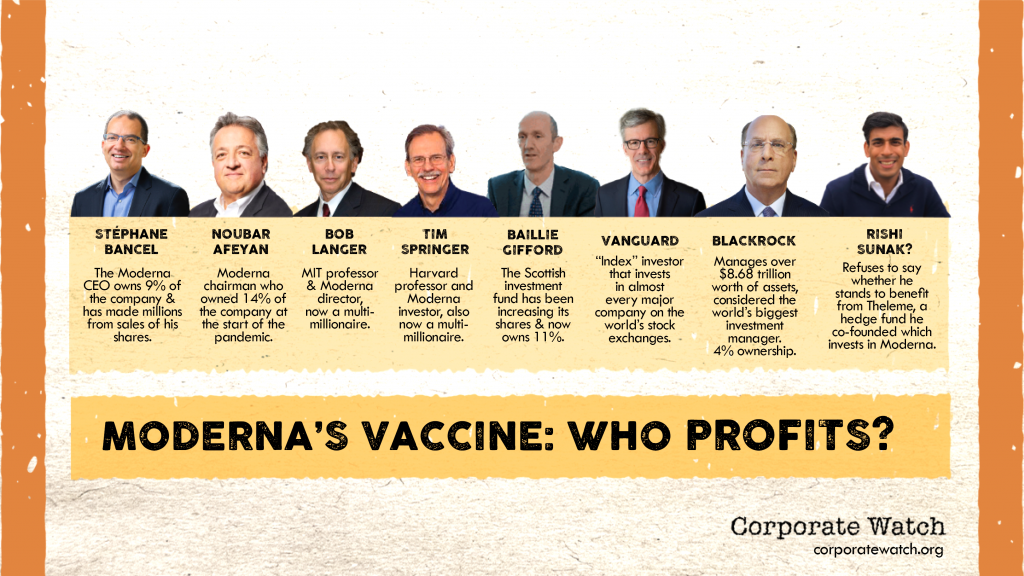 How much did the vaccines cost to develop?

Exact figures are corporate secrets, but it seems likely they each cost around $1 billion to develop. Initial research for a new epidemic vaccine may cost an average of $68 million – though the COVID-19 jabs were developed much quicker. But the main cost is running large scale “Phase 3” trials – for the COVID-19 vaccines these have been bigger than usual, with tens of thousands of volunteers.

How else will the companies benefit?

The vaccines are a massive PR coup. The companies have become household names, and in a good way. That’s quite a turnaround for an industry that was reviled like few others after decades of profiteering. Whether the vaccines could have been produced in a more accessible, fairer way is only now starting to enter public debate, at least in the UK.

The science that underpins the company’s COVID-19 vaccines may also be put to use to treat – and profit from – other diseases. Moderna hopes its mRNA technology can be used to treat cancer, the most lucrative pharma ‘market’. Vaccitech, mentioned above, is raising huge amounts from investors on the hope its COVID-19 tech can be used to treat hepatitis and MERS. Development of the science has likely been helped by ‘road-testing’ through the vaccine roll-out.

Who invented the vaccines?

BionNTech/Pfizer: Research was done by BioNTech, a German pharma research company. Pfizer came in as partner once the vaccine was ready for trials.

Moderna: The vaccine was “co-developed” by Moderna and US government scientists working for the National Institute of Health (NIH). There is some mystery over the exact roles of the NIH and Moderna, just who owns the intellectual property – and why the US government has apparently allowed Moderna to keep all the profits.

The companies’ spin presents the COVID-19 vaccines as a triumph for corporate science. In fact only one of the three leading vaccines, the BionNTech/Pfizer one, was developed by the private sector (making money from the inventions of others is a classic big pharma play – read our explainer here). Also: all the teams benefited from initial research by the Shanghai Public Health Clinical Center, which published the first genomic sequencing of the COVID-19 virus freely on the open source site virological.org. 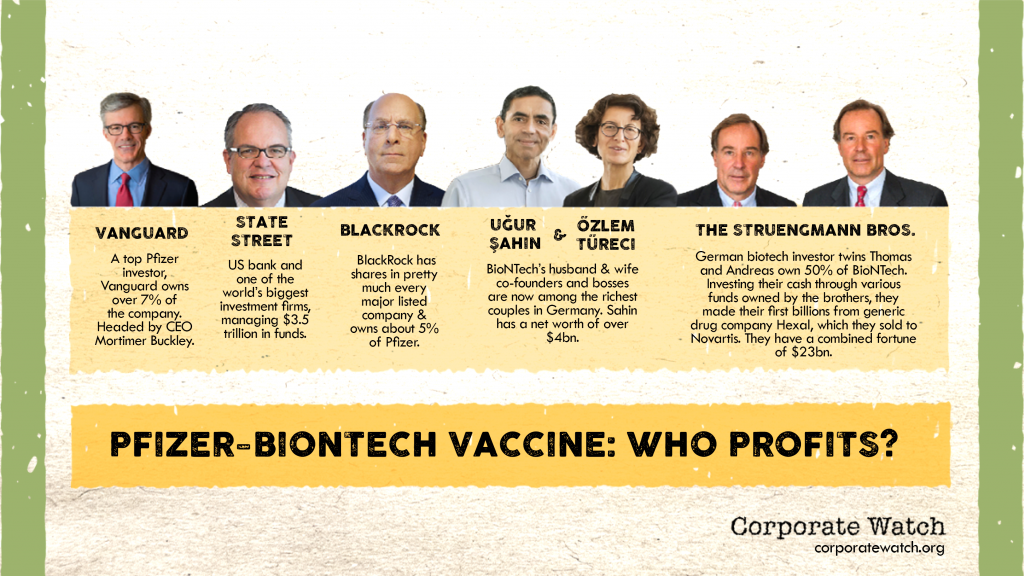 Were there any plans to produce vaccines without Big Pharma profits?

Oxford first considered allowing a range of manufacturers to produce its vaccine without selling exclusive rights to any corporation. But, according to the Wall Street Journal, senior executives at the university, along with major funder the Bill and Melinda Gates Foundation, argued they couldn’t manage a “global roll-out” without the help of big pharma. The university initially entered talks with US pharma giant Merck, before eventually signing with AstraZeneca in April 2020. The deal involves a full license to produce and sell the vaccine in return for $90 million and a 6% share of future royalties, which the university says will be reinvested into medical research. Vaccitech Ltd, a private “spinout” company whose directors include Professors Gilbert and Hill, will get 24% of the university’s cut.

How much public subsidy did they get?

BioNTech/Pfizer: €465 million (around $550 million). Research was funded privately. But they received a €100 million development loan from the European Investment Bank, and a €365 million grant from the German government, to help with manufacturing.

Oxford/AstraZeneca: around $1.3 billion. The vaccine came out of long-term research at Oxford University funded by the UK government and others. The government contributed over £87 million more to develop the new vaccine in early 2020.ii The US added up to $1.2 billion more as part of its “Operation Warp Speed”.

Moderna: over $955 million. US government funding included: an undisclosed amount for phase 1 trials in March 2020; $483 million in April for phase 2 and the start of phase 3 trials; another $472 million to expand phase 3 trials in July. Moderna also got a $1 million donation from Dolly Parton.

As well as these research subsidies, the companies received huge pre-orders from governments even before their vaccines had been approved for use. The US government for example made massive $1.95 and $1.53 billion pre-orders of the BioNTech/Pfizer and Moderna jabs through its Operation Warp Speed.

Who will get the money?

Pfizer/BioNTech: Profits are split 50/50 between the two companies.

Shareholders will receive ‘dividends’ – cash paid out from company profits. Pfizer’s main shareholders are global investment funds: especially Vanguard Group (7.6%), State Street Global Advisors (5%), and BlackRock (4.9%). Run by some of the world’s richest, most powerful people, such as Blackrock CEO Larry Fink, between them this “giant three” control approximately $20 trillion of the world’s assets. Meanwhile, Pfizer’s CEO Albert Bourla made headlines selling £4.2 million of Pfizer shares the day it announced its vaccine worked.

BioNTech is generally presented as a rags-to-riches success story for two immigrant doctors, the husband and wife team of Uğur Şahin and Özlem Türeci. The vaccine has made them billionaires. But the company’s main owners, who owned around 50% last year, are the biotech investor twins Thomas and Andreas Struengmann. They made their first billions from generic medicine company Hexal they set up in the 1980s, then sold to Novartis in 2005.

Moderna: Shareholders include chairman Noubar Afeyan (14% share at start of pandemic), CEO Stéphane Bancel (9%), and professors Timothy Springer (Harvard) and Robert Langer (MIT). They have suddenly gone from directors of a loss-making company to multi-millionaires. Moderna shares have massively increased in value during the pandemic and Bancel in particular has sold off chunks of his holdings in recent months, taking out millions in cash. Moderna listed on the stock exchange in 2018 and its biggest institutional investor is Scottish investment fund Baillie Gifford, which has been buying up more shares recently and now has over 11%. The US giants Vanguard and BlackRock are next, with 5.7% and 4.1% each. One mystery over the Moderna vaccine is if any money will go back to the US government who “co-developed” and funded it.

Oxford/AstraZeneca: AstraZeneca, headquartered in London, is a global megacorp owned by the same big investment funds as Pfizer and others. At the end of 2020 its three biggest owners were BlackRock (7.5%), Wellington Management (5.2%) and Capital Group (4.3%).

According to the Wall Street Journal, Oxford University stands to get 6% of future royalty payments. 24% of those will be passed on to Vaccitech Ltd, a “spinout” private company whose directors include vaccine researchers Professors Gilbert and Hill. They each own around 5% of Vaccitech’s shares. The main shareholder (46%) is an investment company called Oxford Sciences Innovation (OSI), set up by the university to channel capital into its spinout businesses. OSI has numerous shareholders besides the university itself – including Google Ventures, Huawei, Chinese pharma company Fosum (which also owns shares in Moderna), the sultanate of Oman, as well as banks and private equity funds. 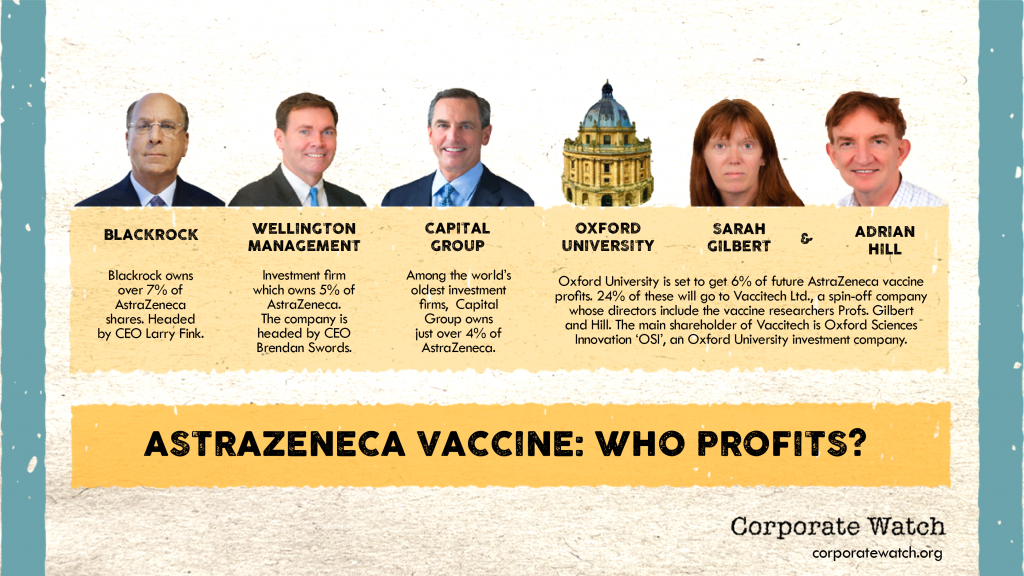 Could it have been different?

The initial research that sequenced the COVID-19 genome and kick-started the vaccine race was published open source, free for all to use. Imagine if vaccine research was also published openly and without patents, so that all manufacturers, including in the global south, could produce what they need at cost price. How many lives could that save? But that would threaten the profits and property rights of some of the world’s most powerful companies and investors.

iBased on current consensus (i.e., average) analyst forecasts of Moderna earnings (profit) for full year 2021, with the COVID-19 vaccine their main product. These are external predictions – but the other points discussed here make them seem reasonable, in comparison with Pfizer’s stated internal prediction.

iiThe vaccine was based on work on MERS carried out by the Jenner Institute, which had been funded by the UK Government’s UK Vaccines Network from 2016. After the COVID-19 genome was released open source, this technology was then “rapidly repurposed”, backed by £2.6 million of government funding in March 2020 for preclinical trials and manufacturing research. The UK provided a further £20 million in April for clinical trials, and another £65 million more in May.