In May 2018 police opened fire on protesters at a rally to mark 100 days of continual protest against environmental pollution at Vedanta’s copper smelter in Tuticorin, Tamil Nadu, India. Thirteen people, including children, were shot dead, 217 were injured, and nine disabled for life in what has been dubbed a ‘corporate massacre’. The plant was later closed down.

Vedanta is the most recent addition to a series of London listed mining companies linked to the murder or “massacre” of protesters, including Lonmin, Glencore, Kazakhmys, ENRC, Essar, GCM Resources, Anglo Gold Ashanti, African Barrick Gold and Monterrico Metals.

Shortly after the Tuticorin massacre Vedanta boss Agarwal made an offer to buy out the remaining 33% of shares he did not already own, via his family trust Volcan Investments Ltd (based in the Bahamas, a UK tax haven). This would make the company privately owned, allowing it to de-list itself from the London Stock Exchange. Formal de-listing is planned at the company’s final London AGM on 1 October. 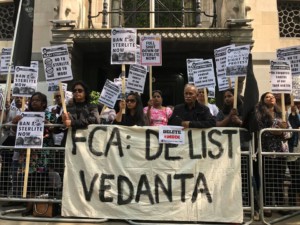 Vedanta Resources was launched on the London Stock Exchange in 2003, raising nearly $1 billion at its Initial Public Offering. De-listing from London will be a serious blow to the company, removing access to significant capital, as well as to the reputational advantage associated with London’s perceived high standards of transparency and corporate governance. Agarwal and Vedanta directors claim the de-listing is part of ongoing re-structuring, but it is more likely a way to avoid further scrutiny for the Tuticorin massacre and a host of other human rights and environmental controversies.

Vedanta’s list of past abuses and controversies makes for sobering reading. These have been detailed in ‘Vedanta’s Billions‘ a report by Foil Vedanta, an independent grassroots solidarity organisation who have been protesting against the company’s harmful activities for many years. 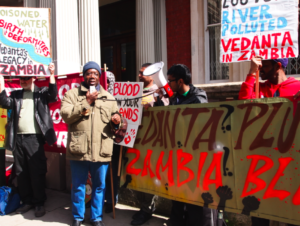 Vedanta was found guilty of a major pollution incident in 2006 in Zambia, where there is also evidence of the company’s widespread transfer mis-pricing and tax evasion. In January 2019 the London Supreme Court will hear on the right of 1,826 Zambian farmers to have their case heard against Vedanta, and its subsidiary KCM, for continuing pollution and loss of livelihood.

In another instance, the state of Goa in India has begun the process of recovering money owed to it as a result of Vedanta’s illegal mining between 2007 and 2012. The company’s operations in the state have been shut down due to a lack of appropriate permissions to operate.

In September 2009, in what is recognised as India’s worst industrial accident since the Bhopal gas disaster, a chimney collapsed while under construction at Vedanta subsidiary BALCO’s thermal power plant in Korba, Chhattisgarh, central India. Forty construction workers are known to have been killed, but eyewitness reports suggest more may have been buried under the chimney. An independent two-year inquiry found a catalogue of illegalities and concluded that the companies involved in the chimney’s construction, including BALCO, were “exclusively focused on maximizing their profits”.

Foil Vedanta, who have been campaigning for Vedanta’s de-listing from the London Stock Exchange, will be celebrating a huge victory but are keen to stress that there is much more to be done to end Vedanta’s abuses. They have vowed to continue fighting against the harm and injustices created by the company’s behaviour around the world.