Waterstones staff are demanding to be paid the living wage. Management say the company can’t afford it but an investigation by Corporate Watch has found:

In short, Waterstones sums up capitalism in Britain today: billionaire owners and millionaire executives living off a workforce on poverty wages.

We put all the points below to Waterstones. It did not dispute the figures but a spokesperson said: “we pay our booksellers as much as it is prudent to do, with a particular commitment to a progressive pay scale” (you can read the full statement below).

How much would it cost?

In response to a petition from staff, backed by prominent authors, Waterstones Managing Director James Daunt said the company was “simply not profitable enough to wave the magic wand and shower gold all around”. He explained:

“If you raise the bottom level really significantly, then everybody all the way up the company has to go up, and then we go bust, which isn’t very helpful”.

To assess this claim, let’s start by estimating roughly how much paying the living wage would cost Waterstones.

The latest Waterstones accounts show the company paid its 3,000 employees a total of £56 million in 2018. Let’s accept Daunt’s point that pay scales should rise proportionally all the way up the company and say they’d go up by 10% across the board (the difference between minimum wage of £8.21 an hour and the living wage of £9).

That means the company would pay staff around £6 million a year more. Let’s be generous to the company and bump that up to £7 million, given its London staff would get the London Living Wage of £10.55.

Waterstones made £16 million profit after tax in 2018, down from £18 million in 2017. Take that £7 million off, and those profit figures remain healthy at £9 million and £11 million respectively.

It’s true the company faced bankruptcy a few years ago and Amazon isn’t going away anytime soon. So Waterstones’ management want to keep a healthy profit margin while times are good. But look closer at those profits and they would be even higher were it not for annual payouts being made to the group’s owners.

Last year, Waterstones was bought by US-based hedge fund Elliott Advisors from the previous owner, Russian billionaire Alexander Mamut (who has retained a minority stake in the company).

No accounts have since been published but company records show the kind of sums that Elliott plans to extract from the company.

A note at the end of the latest available Waterstones accounts filed with Companies House says the hedge fund is investing in Waterstones by lending it £60 million. It is presumably also putting money into the company’s shares (or ‘equity’ in the jargon) but details of this are yet to be published.

Elliott is lending that money to Waterstones at an interest rate of around 7%. A simple calculation estimates Waterstones will have to pay out around £4 million a year in interest as a result.

Look at previous years and Mamut had also put money into Waterstones through loans at roughly the same interest rate. In 2018, Waterstones paid £4 million out as interest on loans to companies also controlled by Mamut, with £5 million in 2017 and £6 million in each of the two years before that.

Without such big payouts to its owners, Waterstones’ profits would have looked even healthier: £20 million last year and £23 million in 2017. This would have given the company a lot more financial wiggle room to increase staff pay.

Alright at the top

Where else could savings be made to enable to afford the living wage staff demand?

Waterstones’ accounts show two directors between them made £2 million in 2018. The highest paid director – presumably Daunt – alone made £1.6 million from the company last year, up £170,000 from the previous year. This is over 100 times more than a full-time Waterstones worker on the minimum wage will bring home. One director – again, presumably Daunt – was also paid a bonus of £1.2 million (read more on this from author Chris McCrudden here).

Given Daunt has said those demanding living wage are “preach[ing] to the converted”, would he or his colleague at the top be able to survive on a meagre £600,000 a year from now on?

If so, let’s do a quick back of the envelope calculation: throw in a million a year from the boss’ salary, accept slightly lower profits, stop paying out £4 million a year to owners and £7 million a year doesn’t seem so unaffordable. 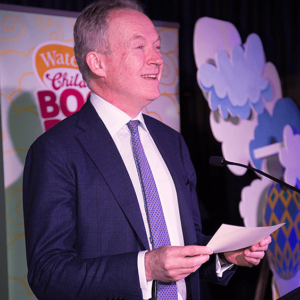 A quick caveat before we move on: at least some of the interest paid to the Mamut companies appears to have been used to pay off loans those companies were themselves taking from banks or other third parties. So not all of that will have been profits enjoyed by Mamut.

It’s hard to know the full details of where the money went under Mamut because he ultimately owned Waterstones through a company registered in the British Virgin Islands, as the last page of accounts downloadable here explain. The BVI is a so-called ‘secrecy jurisdiction’ as well as a tax haven, which does not require accounts to be disclosed. If you work for Waterstones and want us to look into this in more detail, get in touch.

But Waterstones’ new owners are aiming to pocket all of the £4million set to be paid out to them – and, as we will see below, much more.

The magic wand of finance

Why is Elliott investing its money as loans? Why saddle your own company with annual interest payments?

Until the next set of accounts come out we won’t know for sure what’s going on. But the latest we have say Elliott Advisors have set up two shell companies to manage their investment in Waterstones – the catchily-titled Book Retail Bidco Ltd and Book Retail Investco Ltd, which is based in Jersey.

We’ve found Book Retail Bidco is also racking up debt – but this time through the International Stock Exchange in the Channel Islands.

A listing there shows Book Retail Bidco Ltd has issued £129 million in bonds with a whopping 13% interest rate. This looks a lot like the quoted Eurobond dodge we’ve covered before: these bonds will be bought by other companies owned by Elliott. The money Book Retail Bidco received from this will be invested in Waterstones. We’ve already seen it has lent it £60 million so the other £70 million may have been invested in shares.

Book Retail Bidco will either pay out interest on the bonds to the other Elliott companies in cash every year or, more likely, ‘accrue’ it, to be paid out at a later date.

Either way, every year this interest gets taken off the UK profits of both Book Retail Bidco Ltd itself and the corporate grouping it is part of, which includes Waterstones. As a result the total tax bill of the Waterstones business is slashed, while its owners, thanks to a legal loophole called the quoted eurobond exemption, enjoy tax free payouts.

And what payouts: 13% of £129 million amounts to around £17 million a year. The Financial Times reckoned Elliott plans to bulk Waterstones up for a few years (for example through the recent acquisition of Foyles) and then sell it to the highest bidder. If so, expect the interest to accrue each year, to be paid out as part of the price Elliott – if successful – sells the company for.

A price which, let us not forget, will be thanks to the hard work of the staff currently being paid less than the living wage.

All the way up

Who’s ultimately benefiting from all this? Step forward Elliott founder and billionaire “vulture capitalist” Paul Singer, described by the Independent as “a pioneer in the business of buying up sovereign bonds on the cheap, and then going after countries for unpaid debts.” Targets have included Argentina, Peru and Congo-Brazzaville, who a company of Singer’s successfully took to court for $39 million. 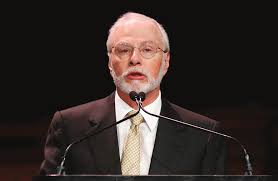 A long-term Republican, Singer has donated millions to, among others, George W Bush, Rudy Giuliani, and the Koch Brothers – whose foundations and think tanks push right-wing causes such as low taxation for the wealthy.

Another of Singer’s causes is, you guessed it, Donald Trump. Initially an anti-Trump guy, Singer quickly changed his tune after the presidential election, giving $1 million to Trump’s inaugural committee.

We put all the points regarding finances and future payouts to Waterstones and Elliott Advisors for comment. A spokesperson from Waterstones said:

“We have answered the petition directly, noting that we pay our booksellers as much as it is prudent to do, with a particular commitment to a progressive pay scale. The retail high street is under extreme pressure, with many highly respected companies closing, and many more in dire straits. Having come close to bankruptcy ourselves, we understand acutely the need for proper prudence. We are fortunate now to be able to invest sensibly in new shops, in refurbishments, in logistics and, above all, in our booksellers. In doing this, we are building a solid business for the future, perhaps not with as fast progress on pay as you wish but – in today’s world – the tortoise is likely to beat the hare.”