Home
/
Banking & Finance
/
Who is Greek debt ‘sustainability’ for? 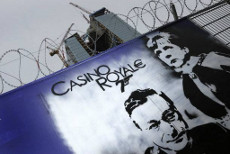 International lenders and their domestic Greek collaborators (the coalition government) are imposing widespread impoverishment and austerity in order to serve their interests. Meanwhile, the debt mechanism continues to chip away at the last remnants of rights that have remained.

Despite this, there is a lot of talk these days about the “sustainability” of Greek public debt, a measure that emerges from the rather arbitrary ratio of debt to GDP. The trajectory of sustainability is estimated via various fanciful and imaginative economic baselines and other scenarios which try to locate the precise ratio at which Greek debt would be sustainable.

Prior to the 2009 deficit revaluations, the debt was 110% of GDP, a ratio that was used to terrorise citizens with the danger of default by suddenly awakening them to its ΄obvious΄ non-sustainability. It was on the ΄necessity΄ of lowering this ratio that the memoranda (the austerity packages) were based on. The packages try to convince that after the Greek state has forcefully indebted itself at least an extra 247 billion euros for its ΄salvation΄, and after it reaches the projected peak of 175% in 2016, a scenario of debt to GDP in ten years time (in 2020) at 124% will in fact be sustainable.
The Greek Debt Audit Campaign stands against the debt dictatorship and its supposed sustainability for the following reasons:

The august institutions of the IMF, ECB and EC have proved they are totally incapable of predicting the direction of the Greek economy and its related debt sustainability. Compare the Troika΄s projections with the ruthless reality and it is clear they cannot forecast even three months ahead with any precision, let alone assess debt sustainability in two, three or ten years. However, it was on the basis of their estimations, that the governments of the memoranda and the international lenders have shut schools, hospitals, and thousands of businesses – all in the name of a debt sustainability (which they simply hadn΄t calculated correctly).

After the hasty bundling of public utilities΄ debt (18 billion) and the Golman Sachs-soured swap (5.4 billion), public debt came to 329 billion euros in 2010. After three and a half years of fiscal adjustment and social disaster, the debt for 2013 has reached 322 billion (or 175% of GDP). And they still talk about debt sustainability, even though 563 billion euros were already paid in public debt servicing between 1992 and 2013.

If we were to use a different concept to sustainability, such as illegitimacy or odiousness, then we would reach very different conclusions about the acceptable levels of debt. The concept of debt illegitimacy raises concerns about the degree to which a state΄s resources should or should not be tied for debt repayments when simultaneously butchering social and labour interests and rights. This was, by the way, the position of the independent expert of the UN who visited Greece to assess the consequences of foreign debt repayments and the austerity it entails.

Using other ratios to assess the levels of debt, such as the amount the state spends on health or on education, we would forthrightly say that the debt has long been unsustainable. For example, by looking at the draft budget of 2012, we see that interest payments on public debt absorbed 2.5 times as much money than pensions did, and 3.5 times more than education.

When a state is unable to fulfil its obligations to its lenders and simultaneously manage the needs of the populace, it can call on the ΄state of necessity΄ to defend itself from the haemorrhage of debt repayments. So, rather than figuratively hiding behind a ΄state of emergency΄ to repress and prohibit protests and to justify the increasing use of Legislative Acts, the state could draw upon legal practise and precedent to stop debt repayments.

The Memoranda and Loan Agreements were signed and imposed in a manner with no legitimacy or credibility for the populace. They did not even meet formal requirements of the constitution or parliament.
Consequently:
a. it is necessary to remind ourselves of the reasons why Greece entered the memoranda and bailouts. The Memoranda and continuous austerity was imposed to ensure the sustainability – not of Greek debt – but of major multinational banks, rather than high wages or an uncompetitive economy jeopardising the entire euro zone.

b. We do not question the debt from primarily a legal perspective but a political and social one. From the instant the accumulation of debt works against the interests of people within Greece we would say it is illegitimate. We do not forget the magnitude of the debts foreign banks gave to local authorities which were later offloaded to the government budget, nor the over-costing of public works, or the exorbitant cost of the Athens Olympic games. The list is endless.

c. After the PSI and the extensive imposition of bilateral and multilateral loans, the Greek debt profile is completely altered. The greatest amount of Greek debt is held by the EU member states, the IMF and the European bailout fund EFSF. Only 23.7% remains as bondholder debt, in the hands of various hedge funds who have made millions from it. The Troika is not only lending us the money and imposing strict disciplinary austerity to make sure the banks wont collapse, but now, to make sure the Troika΄s own loans will be repaid.

d. The first bailout calibrated the loans on the basis of the amount each country contributes to the ECB΄s capital, meaning Germany would give 22.3 billion, France, 16.7 billion etc. From the expected 80 billion, 73 billion was disbursed and Germany ended up lending 15.7 billion, with high and variable interest rates. The rates may have come down but the draconian surveillance remains, rendering these loans a good investment for the member states. It is from the sweat and blood of the people, i.e. the primary budget surplus that the government of Samaras-Venizelos has warmly welcomed, that their investments will come to fruition.

e. Any agreement that is defined by and for the creditors will simply reflect the continuation of these obviously failed debt management policies. We therefore propose to stop paying the debt, to engage in a debt audit and proceed to cancellation.