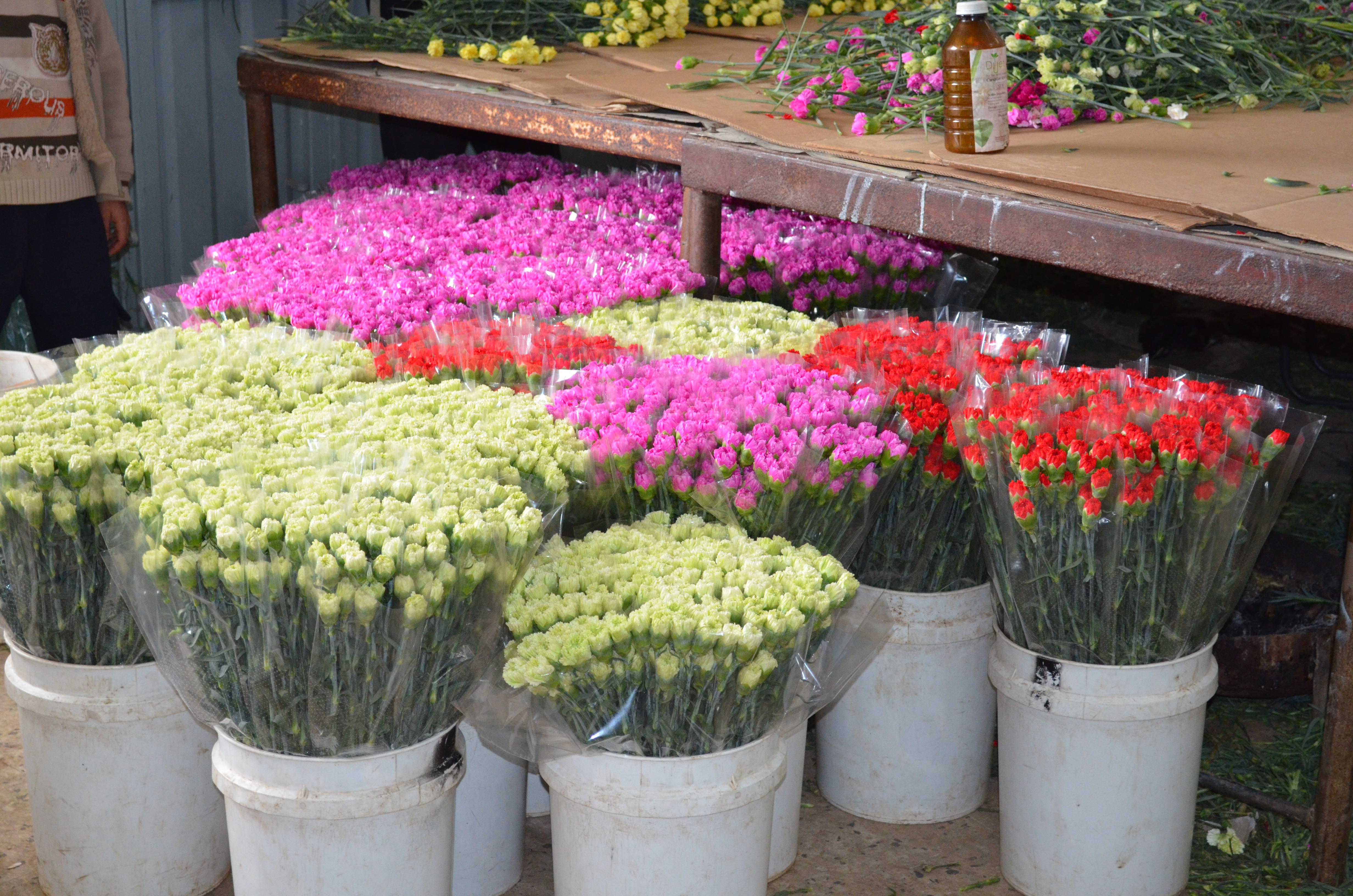 Valentine’s Day is almost upon us and for supermarkets and florists that means a massive increase in the sale of flowers. But where are the bouquets they are flogging to romantic couples grown?

Farmers in Gaza have long been encouraged by Israeli companies to focus their production on high risk ‘cash crops’ such as flowers and strawberries, and the arrival of carnations from Rafah to European markets for Christmas or Valentine’s day is often cheered on by the Israeli Government which uses it as a PR exercise to show how it ‘facilitates’ Palestinian exports. Unsurprisingly, this is not the full story.

According to the Palestinian Union of Agricultural Work Committees (UAWC) there used to be over 500 dunams of carnations planted in the Gaza Strip, but since the tightening of the siege in 2007 flower exports have plummeted year on year and there are only around 60 dunams left. The planted land used to produce over forty million stems for export, but now the few carnation farmers who are left are struggling to sell 5-10 million.

“The Israeli occupation allows us to export a small quantity of produce, just to show the world that they are nice to the Palestinians, but they are using us. Everything we do is controlled by them”, Saad Ziada from UAWC told Corporate Watch in his Gaza City office in November last year, just before the flower exporting season was supposed to start.

This statement is true for all produce in Gaza but flower exporters are particularly susceptible to the control Israel holds over exports, as they rely on hitting the market at exactly the right time for popular flower buying holidays. If the border is closed for a week and the flowers miss the export window for Valentine’s Day, for instance, their profit for the whole year can be lost.

We visited Rafah to talk to one of the few flower growers still in business and hear about their situation under the siege.

‘The problem is the border and the siege’

Hassan Gazi al Hijazi has been in the flower business for over 25 years and has seen the changes in the flower export industry. When he started out he had to be registered as an Israeli grower, despite growing his flowers in Gaza, and he gave classes in the art of flower growing to new farmers. “There used to be 53 flower farmers in the Rafah area and now there are only four of us left” he told us. “I personally used to have 40 dunams and now I only have four”. He said that he needs assistance from outside to even operate them now. His flower packing house displays signs showing financial support received from Spain.

Just as with all produce from Gaza, his flowers have to be exported via Israel, through an Israeli company. In the past this used to be Carmel Agrexco, which used the name Coral for Palestinian produce. After its liquidation, he now works with a Palestinian Co-operative which exports under the brand name Palestine Crops using the slogan ‘From Palestine Land to Global Markets’. Palestine Crops is a Gaza initiative which works with agricultural co-ops in the strip and aims to create a market for Palestinian labelled goods and, eventually, independent exports. For now, however, this is impossible and although some exports from Gaza come with Palestine Crops branding, they are dependent on their Israeli distributor. In the case of flowers, this is primarily the Flower Board of Israel. Once transported out of Gaza, the flowers are taken to the big flower auction houses in Holland, where they are sold by grower name. By the time the bouquets reach UK shops they will have been mixed with other flowers and it is unlikely the buyer will be aware of their origin.

Talking to Hassan, it becomes obvious just how much the farmers of Gaza are at the mercy of the Israeli occupation forces. Palestine’s flower export season lasts from December until May. The most important sales periods are Christmas and Valentine’s Day. According to Hassan, these are often the seasons when the border is closed. Our interview took place on 5 December, a time which should be busy in Rafah.

“I should be exporting my flowers around the 15 December to be in time for the Christmas market, but I do not know how much I will be allowed to export yet”, Hassan told us. “if you are not able to export for those occasions the price for flowers drops and you lose”. Farmers in Gaza are not able to export flowers during the summer as this is the season when Holland grows the same crops.

“The problem is not the growing of the flowers, the problem is the border and the siege”, Hassan said while showing us his beautiful dunams of ready-to-go flowers. As with most custom-designed cash crops there is not enough of a local market for Hassan’s flowers if he fails to export them; they either just go to waste or become animal food. No one in Gaza can pay a price which would even make the enterprise break even.

In the past Hassan could get around $120,000 for exporting two million flowers if he had a good season, but for the last five years he has been paying the big upfront outlay necessary in flower growing from his own pocket, just dreaming that he will be able to get a return on his investment.
The statistics: The decline of Gaza’s flower exports

The table below shows that flower exports have decreased to a fraction of what they were in 2004. During 2009 and 2012, the years of major Israeli attacks on the Strip, exports were prevented entirely.

Gaza’s flower growers see no light at the end of the tunnel, with most not having the cash flow to continue their profession. Exports are declining and, with increased border closures, are becoming even more unpredictable.

We asked Hassan for his opinion about the boycott, divestment and sanctions movement. We were particularly interested considering that his livelihood relies on exports through Israeli companies.“ You should continue these campaigns even if it damages our business”, he said. “The problem for us is that there is no other way we can export, but people on the outside should continue to boycott and help us keep the borders open”.

This sentiment was one that was repeated over and over again across the Gaza Strip, and the challenge for the solidarity movement is clear: in order for Palestinians to be able to control their own exports, the siege needs to be broken – permanently.

We will publish further articles on the problems faced by Palestinian exporters in the coming weeks.